In every place I have lived or spent time, I am intrigued by the variations in the underlying geologic structure and deeper geologic history of the earth. The metamorphic rock in Vermont and New Jersey reveal a history of repeated cycles of tectonic plates colliding, separating, colliding, and separating again with a vertical intrusion of magma during the most recent separation. The triangular shaped reddish-brown sediment-filled units in Newark Basin, reveal faults where blocks of crust dropped while the supercontinent Pangea broke apart and the Atlantic Ocean opened a short distance to the east.

The metamorphic rock below New York City is hard and durable; the layers of volcanic and sedimentary rock contained within Boston’s granite basin record a different history of volcanic eruptions, mountain building and erosion. Shallow almost horizontal layers beneath Minneapolis/St. Paul reflect a former inland sea environment, that cover a deeper layer infilling a failed rift that could have split the continent in two. The steeply dipping layers below San Francisco represent a volatile event on the western shore of North America – the collision and subduction of the Pacific Plate.

Together as a continuing series, these images act as a reminder that our foundations are far deeper than the basement floor in our home and that the history of our local region is far greater than thousands of years of human history. 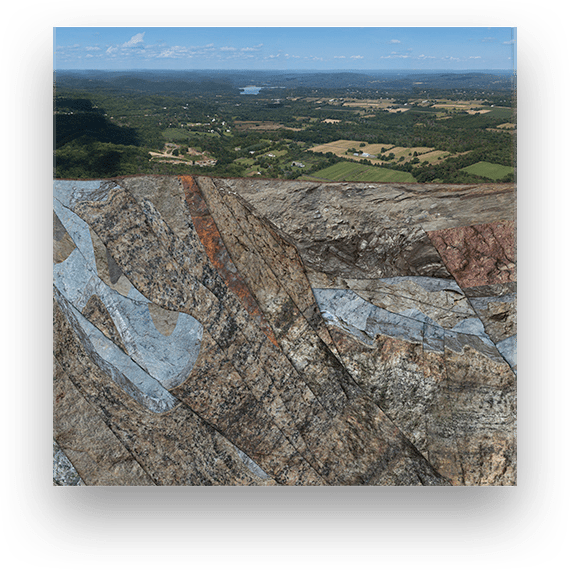 I like to live with a sense of deep time.  It provides context to our human existence on the planet in both space and time.  For a decade, I tried to piece together the deep history of this region.  Rock outcrops and bedrock I drilled into as part of my geology work, provided clues to the underlying makeup.  Ultimately, the creation of this image, “Newark Basin”, provided the deeper history and sense of place that I sought.

In this 15-mile-wide view we are looking north at the city of Minneapolis on the left and St. Paul on the right with the Mississippi River flowing between them. The image depth of 1,400 feet represents a span of over one billion years. 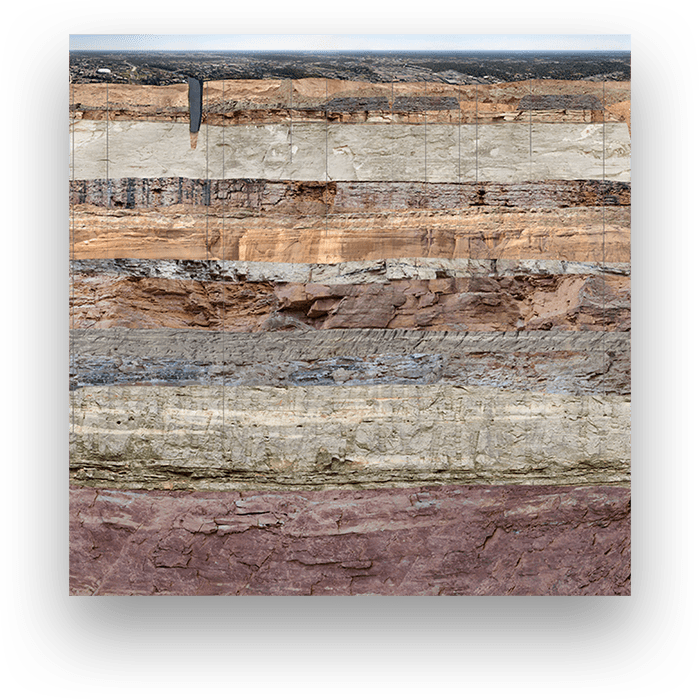 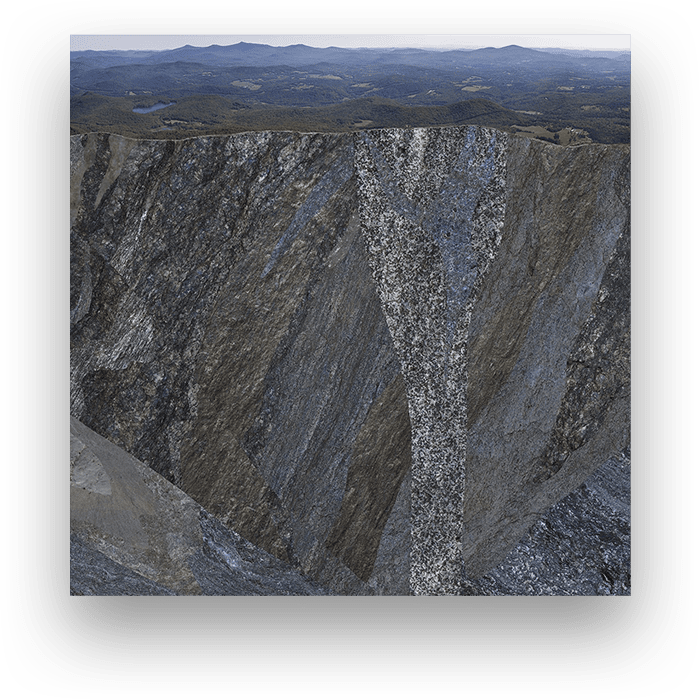 This image is homage to my hometown. As a child, I explored the Green Mountains with great curiosity – questioning what lies beneath the soil and wondering, ‘how did these mountains form? Why is a ridge located here and a valley located over there?” Now, decades later, I return in search of answers. This image shows 4¼ miles in depth below Shrewsbury in Central Vermont looking north – northeast. 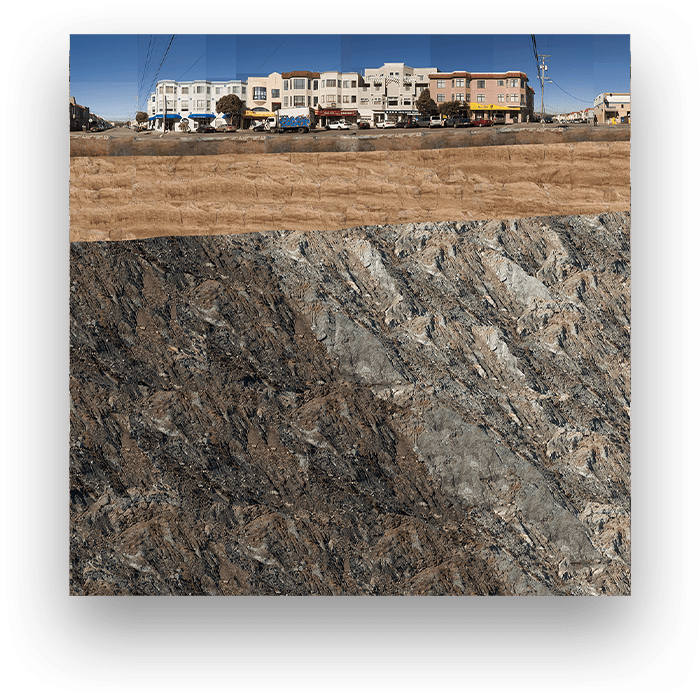 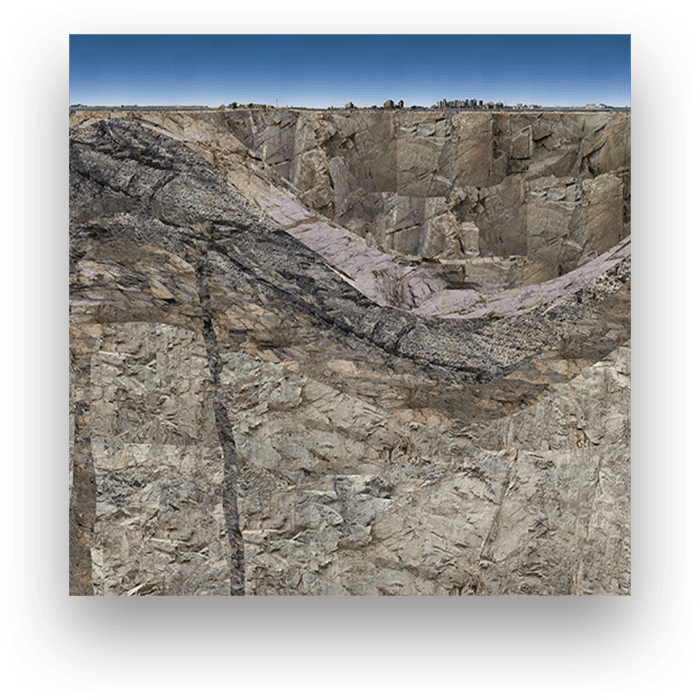 In Boston, I was interested in capturing a better sense of the basin that the city is built upon. As I investigated the rock below the city, I wanted to see the outer edges of the basin. I stepped back, so to speak, until I gained a view of the entire basin from a geologic perspective. The result is this image that represents sixteen miles of width and four-and-a-half miles in depth. The view is looking west. From left to right, it stretches from Quincy and Milton, through Dorchester, and South Boston to the downtown Boston area and inner harbor near the center, and then through Charlestown, Everett, and Malden, ending in Stoneham.

This dense city block in New York City is supported by a bedrock of Manhattan schist. The juxtaposition of such massive stone buildings as the Dakota Building (located to the right in the image) and the foundation of dark grey rock below offers an intriguing interplay between urban and geologic density.

This image is a geographic extension of the New York City Block image-it extends east into Central Park. The contrast between the human built environment and the naturally vegetated environment intrigues me as both an artist and geologist. How do we feel when we are standing in the forested space of the park versus on the sidewalk along the city block?